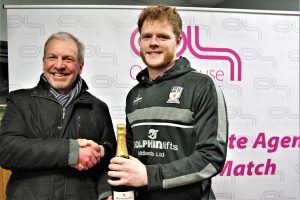 The result saw Rangers’ unbeaten run extended to four games but, on the downside, they are now without a home win for eight games – a run that extends back to 18 September.

There was just one change to the starting line up from the side that drew at Morpeth with Joe Cuff replacing the injured Theo Bailey-Jones.

A crowd of 718 was in attendance but they witnessed an afternoon of struggle and frustration with few clear cut chances at either end. Boro’s Luke Pilling was the busier of the two keepers with three noteable saves while Hyde’s Joe Green faced just one shot on target.

There were a number of penalty area scrambles and shots blocked but the opposing defences came out on top.

Hyde created the first opportunity which saw Tom Pratts stab a shot over the bar from the edge of the area.

Rangers’ match plans received a set back when defender Jon Moran hobbled off with only five minutes on the clock but they had a ready made replacement on the bench in Luis Morrison.

Pilling was called in to action on 18 minutes when kept out a well struck drive from Liam Tongue after two Hyde players had let Jack Dyche’s cross run past them.

The last game at Marston Road had seen a stunning solo goal from Cuff and he nearly produced another as he cut in from the left but his finish failed to match his run and the ball went out for a goal kick.

Tom Tonks came close as he fired goalwards through a crowd of defenders but Green saw the ball all the way. A minute later, Joe Kenton fired over the intersection of bar and post.

Shortly before the interval, Pilling blocked an effort from Dyche after the midfielder was put through by Lewis Earl.

Pilling saved Rangers again when he blocked Earl’s back post header while Green survived an error as he dropped Tonks’ corner but Kaiman Anderson – on for Alex Fletcher – was unable to mark his debut with a goal as visiting defenders crowded him out.

Two more half chances – for Cuff and Kenton – went unconverted while Earl missed a late chance to snatch the points for Hyde when he fired over with the last chance of the afternoon.