A cabinet minister has refused to be drawn on the future of a Tory MP who allegedly groped two men, as Labour demands he is kicked out the party.

Wales Secretary Simon Hart told Sky News he was “very sad” about the situation, but insisted it was for the Conservative chief whip to make a decision over the future of Chris Pincher.

There was also a complaints process to be followed, he said.

Mr Pincher, 52, resigned from his role as deputy chief whip after admitting he had drunk “far too much” and “embarrassed myself and other people” on a night out.

“I apologise to you and to those concerned,” the MP for Tamworth said in a letter to the prime minister.

As deputy chief whip he had been responsible for party discipline and ensuring the smooth running of government business at Westminster.

Mr Pincher “groped two men in front of others” at the Carlton Club in the St James’s area of central London, a government source told Sky News.

One of them was an MP, and the second may also be a member of parliament, the source added.

The controversy has led to calls for Mr Pincher to be stripped of the whip, which would see him suspended from the parliamentary group, forcing him to sit as an independent without the support of the party.

Mr Pincher has been an MP since 2010 and at the last general election was returned with a majority of more than 19,000.

The Conservatives will be anxious to avoid another by-election coming in the wake of two recent bruising polls. 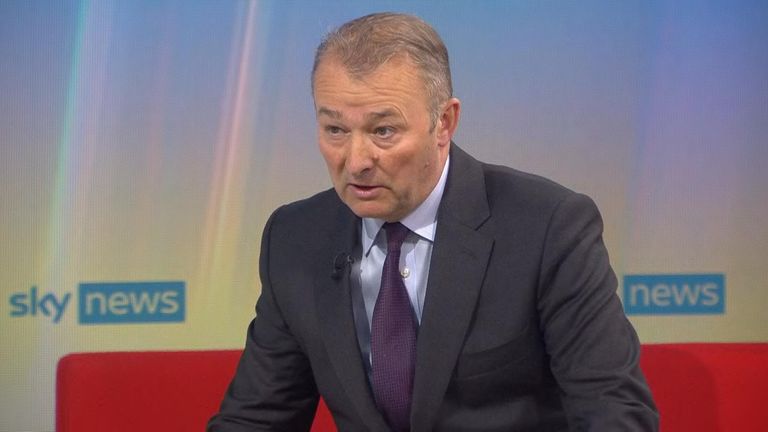 ‘Something has gone terribly wrong’

Mr Hart told Sky News: “This makes me very sad, it makes me sad for everybody who’s been involved in these things.

“It’s clearly something which has gone terribly wrong.

“There is a process, I think it’s important that the process is followed.”

He added: “I think it is entirely right, that the chief whip and others take a view today about what is the appropriate course of action.

“Of course, if there are those who are victims of this or who wish to raise complaint, they can do so.

“The chief whip looking into this and deciding what to do next is not dependent on a complaint being made, that can happen anyway.

“Let’s let today play out, let the chief whip do his duty today, and then I think we might be having a very different conversation as the day goes on.”

Pressed over whether he hoped the matter would get swept under the carpet, he said: “Absolutely not.

“This is not the first time, I fear it possibly won’t be the last. This happens in workplaces from time to time.”

It is the second time Mr Pincher has quit the whips’ office.

In November 2017, Downing Street said he had “voluntarily referred himself both to the party’s complaints procedure and the police”.

The Mail on Sunday reported he had been accused of making an unwanted pass at Conservative activist and former British rower Alex Story.

Mr Pincher told the newspaper: “If Mr Story has ever felt offended by anything I said, then I can only apologise to him.”

Theresa May reappointed him to the whips’ office the following year.

Responding to the latest allegations, Labour frontbencher Ellie Reeves said: “It looks like another day another Conservative Party scandal.

“It’s a party now that is mired in sleaze.

“We have seen the deputy chief whip resign from his role in Government, but he still has the Conservative whip.

“There seems to be a sense of brushing it under the carpet.

“There are real questions about how the deputy chief whip got his jo in the first place given he had previously had to resign from government due to similar allegations.

“It is just not good enough from the Conservative Party.”

It is the latest controversies to rock the Tory government, including the partygate scandal that saw Boris Johnson fined by the Metropolitan Police for breaking lockdown rules.

In May, Neil Parish resigned as a Conservative MP after admitting watching pornography in the House of Commons.

Before his latest spell in the whips’ office, Mr Pincher was minister for Europe and the Americas, and minister for housing.

He also writes a column on alcoholic drinks for The Critic magazine. A recent one was headlined: “Fall into the gin trap.”

The Tories are not the only party currently facing sleaze allegations.

Earlier this month, it emerged that SNP MP Patrick Grady was facing suspension from the House of Commons after an allegation of sexual misconduct was upheld following a parliamentary investigation.

An independent expert panel recommended that Mr Grady be suspended from the House for two days for making an “unwanted sexual advance” to a member of party staff at a work social event at a pub in 2016.

Mr Grady was also ordered to make a public apology in the chamber and to say sorry privately to the person who complained.

The SNP’s leader in Westminster, Ian Blackford, has faced calls to step down in connection with the same matter.