England’s newly crowned Euro 2022 champions have celebrated before thousands of fans after claiming the first major trophy in their history.

“I think we’ve partied more than we’ve actually played football in the last 24 hours,” said the Lionesses’ captain Leah Williamson, to cheers from the crowd.

On a more serious note, she said she believes the win has inspired “change of the best kind”.

England boss Sarina Wiegman and the team showed off the trophy to supporters gathered at a fan zone in Trafalgar Square, some draped in flags which simply read “Home”, to toast and get a glimpse of the European champions.

Wiegman, who coached the Netherlands to victory in 2017, hailed the “willingness to want to win so badly” and the “commitment and resilience” of her players.

Williamson described the Dutch coach as the “missing ingredient” and her side the “dream team”.

“This team likes to work hard but also likes to party hard,” she said.

Lucy Bronze looked to the future and said the aim was now to win the World Cup next year, while Jill Scott said her hopes were that women’s football would now be known simply as “football”.

After a rousing rendition of the Tina Turner classic River Deep, Mountain High, the squad joined fans in the obligatory performance of Three Lions.

They cheered on a montage of England’s path to glory as it was played on the big screens. 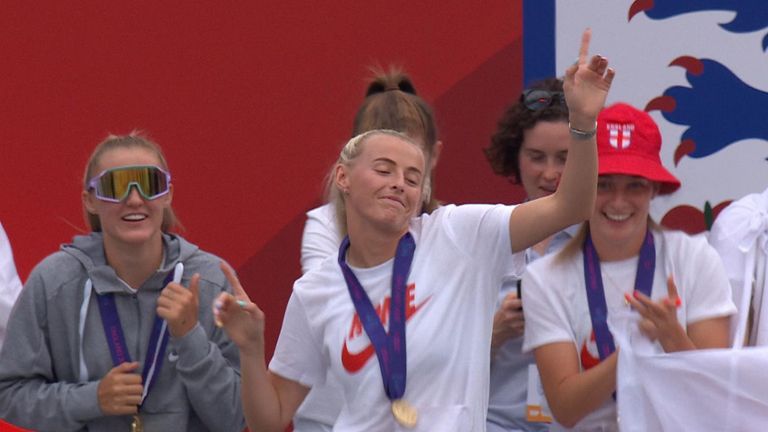 Goalscorer Ella Toone, who initially put England into the lead, said her goal was the “best feeling in the world”.

She said it “took about 10 minutes to go in the back of the net” but she was “buzzing” afterwards.

The Lionesses’ 2-1 victory over Germany at Wembley last night was the first significant silverware for a senior England side since the 1966 World Cup triumph over West Germany.

The dramatic final was watched by a crowd of 87,192 at the national stadium – the biggest-ever attendance for any Euros game, men’s or women’s. 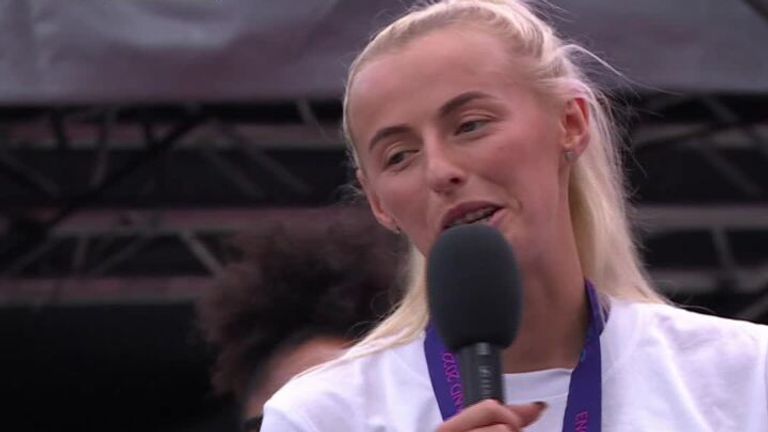 Chloe Kelly: ‘The shirt’s staying on’

The squad partied on long after the final whistle was blown, through the night, and even with fans outside the team hotel, The Lensbury Resort in Teddington.

Describing the celebrations, Wiegman told Lionesses Live: “(It was) crazy. Lots of music, lots of dancing. English people can drink!

“A little bit too much alcohol, I think. But that’s okay. We enjoyed it. When you have these accomplishments, it’s really good to have a party.”

Williamson was asked how she felt. “A little bit rough, but alright,” she said.

England goalkeeper Mary Earps, who memorably danced on the table during Wiegman’s post-match news conference, said: “I saw my moment. I saw my opportunity. I took it. I felt like it was the perfect moment to get on a table.

“If you can’t get on a table after you’re the European champions, when can you?”

And the party continued into Monday for Wiegman and her players amid a sea of England shirts and flags, with the Queen hailing their historic win as “an inspiration for girls and women today, and for future generations”.

Among those at Trafalgar Square was Chris North, 52, who said his six-year-old daughter was excited to see her “new role models”.

“My wife’s an ex-women’s rugby player, so we always had women’s sport in our family, but they were so inspiring last night,” he said.

“The game was so exciting to watch. It’s definitely a new dawn, which is fantastic.” 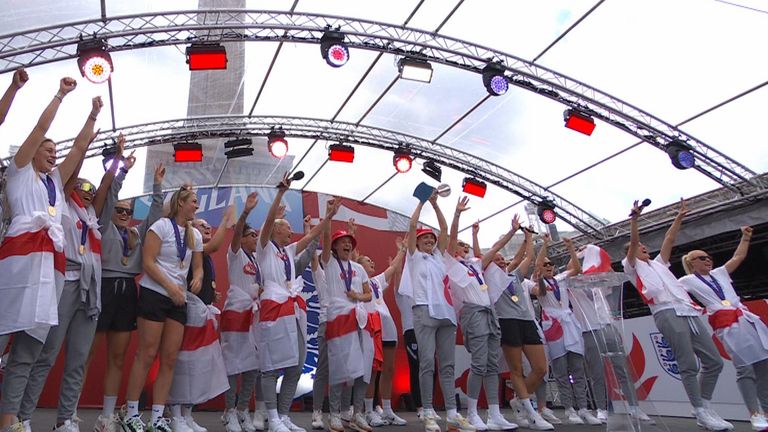 Ryan Grumbridge, 40, and Gemma Grumbridge, 43, travelled from Oldham to London to watch the final at Wembley with their two daughters.

Mr Grumbridge, who is a coach for the 250-strong girls’ football club Crompton FC, said this is a “massive” moment for women’s football.

“It’s good for them to get some recognition – I hope it keeps growing and growing, and we’ll carry on getting decent-sized crowds.”

As the celebrations came to an end in central London and fans waved off the team coaches, one father said to his toddler son: “This is history.” 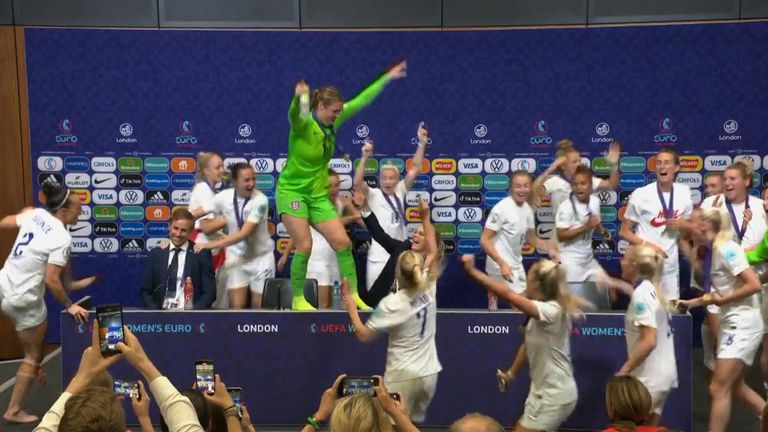 Earlier, it was announced the players and head coach will be awarded the Freedom of the City of London following their Euro 2022 triumph.

The 23-strong team and Wiegman will be invited to attend the ceremony later this year.

Meanwhile, Downing Street faced questions on honours for the England team, Prime Minister Boris Johnson’s non-attendance at Wembley, and the lack of a No 10 reception for the squad.

Unlike other successful sporting teams, the Lionesses will not be honoured with a visit to No 10 this week. Mr Johnson was attending the funeral of Northern Ireland peace process architect Lord Trimble on Monday and will be on holiday from Wednesday.

Any chance of a bank holiday?

The PM’s official spokesman said Mr Johnson watched the game on TV at Chequers, but his German counterpart Olaf Scholz was at Wembley.

Asked if Mr Johnson will back damehoods for the team, he said: “The prime minister would definitely want to see the team receive the recognition they rightly deserve for their historic victory. On honours specifically, there is obviously a process that is a matter for the independent honours committee, but clearly the public want to see (the) Lionesses receive recognition.”

On calls for a bank holiday, he added: “Obviously we all want to celebrate the Lionesses’ win, but there are no plans to change the current pattern of public bank holidays.”

It was also the most-watched programme of the year so far in the UK, according to the BBC.