Liz Truss has refused a Conservative Party member’s request for her to apologise for proposing to link public sector pay to local living costs – reiterating that the policy was “misrepresented”.

Conservative Party member Tom from Gateshead, participating in Sky News’ The Battle for Number 10, asked the foreign secretary and Tory leadership frontrunner to apologise for initially planning to introduce a policy which was “actually quite offensive”.

Ms Truss refused to do this, repeating that the media had “misrepresented” the proposal and that she is “not going ahead with this policy because of the concerns that have been expressed”.

Ms Truss also said a recession is not inevitable after the Bank of England warned Britons face two years of tumbling household incomes with inflation set to soar to more than 13% and the economy plunging into the longest recession since the financial crisis.

“What the Bank of England have said today is of course extremely worrying but it is not inevitable. We can change the outcome and we can make it more likely that the economy grows,” she said.

Meanwhile, quizzed on the same topic and as to whether there is nothing he can do about a recession, fellow leadership contender Rishi Sunak told the Sky News programme: “Of course, there is, of course.”

He said “gripping inflation” is the most important aspect of preventing a recession, adding: “So what I’m not going to do is embark on a borrowing spree worth tens of billions of pounds, put that on the country’s credit card, ask our kids and our grandkids to pick up the tab because that’s not right. That’s not responsible.”

He faced a tricky moment during the special leadership show, with one Tory member heckling: “You knifed Boris for your own interest.” 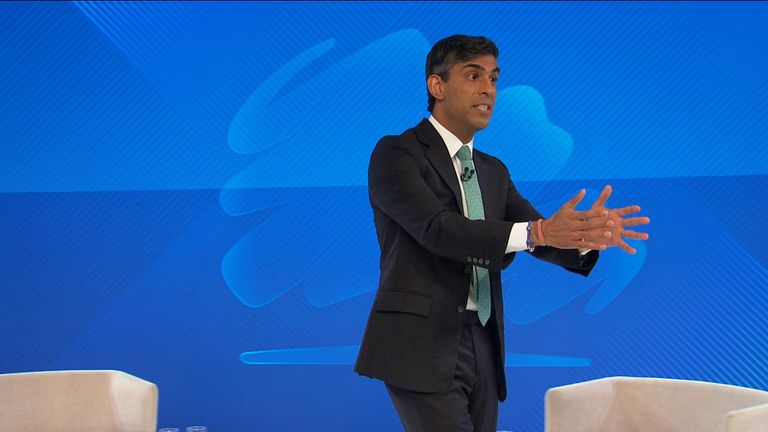 Sunak accused of ‘knifing Johnson in the back’

Responding to the comment, which referred to the former chancellor quitting his cabinet role last month that led to a swathe of ministerial resignations, Mr Sunak justified his departure, saying: “The government was on the wrong side of an ethical problem I could not defend.”

Mr Sunak also vowed not to concede in the Tory leadership contest despite Ms Truss being ahead in the polls and pledged to “fight incredibly hard ’til the last day” of the campaign.

Asked if he would resign by a Conservative Party member in the audience, the ex-chancellor said: “The quick answer is no, and that’s because I’m fighting for something I really believe in and I’m taking my ideas around the country.”

Mr Sunak’s answer came after surveys carried out by both YouGov and ConservativeHome this week showed Ms Truss extending her lead over him in the race to Number 10.

Ms Truss was probed extensively on her U-turn this week over her public sector pay proposal.

Asked by presenter Kay Burley how she reached the £8.8bn figure as part of her plan if the policy was “misinterpreted”, the foreign secretary admitted: “I don’t have the details.”

She added: “I do accept that the way the policy has been interpreted to cover those people was not right. And that’s why I took an immediate decision not to go ahead with it.” 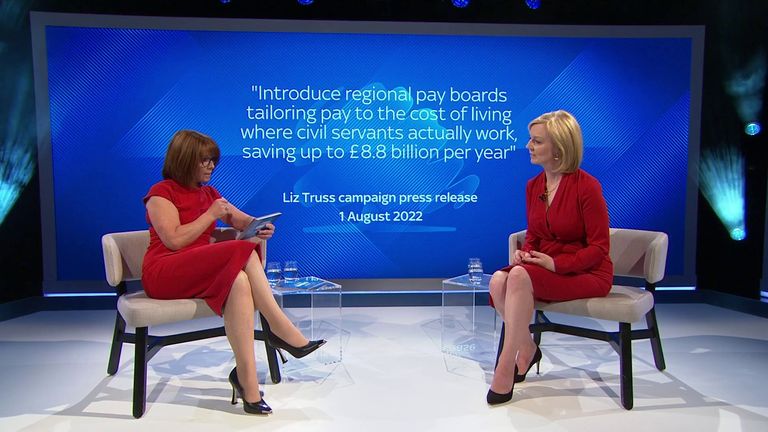 Truss quizzed on how she reached saving figure of £8.8bn

On Monday night, the foreign secretary said she would save £8.8bn by introducing regional pay boards instead of national ones to set salaries for civil servants which would have meant paying government employees in poorer parts of the country less than their counterparts in more affluent areas, such as the South East and London.

Experts warned that to reach the sum the plan needed to include the likes of teachers, nurses and police officers.

After the policy sparked outrage from a number of Conservatives, on Tuesday lunchtime Ms Truss’s team U-turned on the plans and released a statement insisting “current levels of public sector pay will absolutely be maintained”.

Elsewhere during Sky News’ special leadership programme, Mr Sunak was also probed on whether he or anyone in his family has benefitted from offshore tax havens.

He replied “no”, adding: “I have never benefitted.”

Other key points during each candidates’ 45-minute long grilling included:

• Ms Truss told the audience: “There are no skeletons in my closet.

• Mr Sunak defended an old video where he claimed not to have any working class friends, saying “we all say silly things when we are younger”.

• The foreign secretary said “it would be wrong for us to give away any territory on behalf of the Ukrainians”.

• Mr Sunak said an “enormous difference” can be made between now and next winter to reduce the UK’s dependence on Russian energy.

• When told by an audience member that her policies are “not sound economics”, Ms Truss said “trying to balance the books prematurely is actually counterproductive”.

• Ms Truss said she would support doctors and nurses by “removing some of the central diktats” and by “having fewer layers of management”.

• The former chancellor said “yes, I am tough enough” on Ukraine.

• The foreign secretary refused to say whether she would strip the Tory whip from Boris Johnson if he is found to have lied to MPs.

Ms Truss also seemingly carried out another U-turn by rowing back on her previous belief that more homes should be built on greenbelt land to boost the economy.

“I’ve changed my view on that,” Ms Truss said when probed on the matter, adding: “What I’ve seen is the way these top down targets have resulted in having the opposite effect of getting the homes built.

“And I’m now of the view that what we need to do is have incentives to get local councils to set up investment zones and do things differently, because the current system isn’t working.” 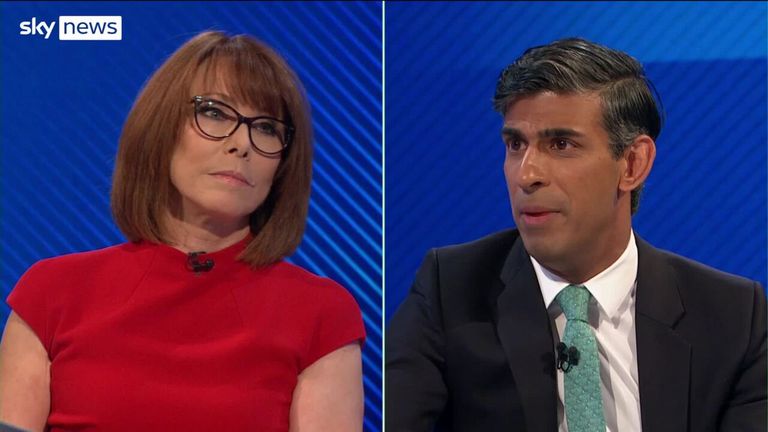 Are you tough enough to stand up to Putin?

Meanwhile, Mr Sunak attacked Ms Truss on her economic policies, saying he was not “promising tens and tens of billions of pounds of goodies” in an apparent swipe at the foreign secretary’s plans for tax cuts.

He described such an approach as “risky” and said he wanted to “be honest” with the country.

“I want to be straight with the country about the challenges we face and what is going to be required to fix them.”

“And that’s why I think you can trust me on this because I’m prepared to do that. Even though it’s going to cost me politically,” Mr Sunak told the audience.