The brewery which found it’s home here in Stafford is closing after 27 years!

The company was first founded in 1995 with their beers being sold all around the UK, including in the house of commons.

In 2007, Jeremy Lefroy the Conservative Party Member of Parliament for Stafford arranged for Top Totty to be sold as a guest ale in the Strangers’ Bar in the House of Commons. . In 2012, Top Totty was again placed on sale in the Stranger’s Bar due to it selling out within 3 days last time It was on sale. Two days later, the Labour Party’s Shadow Minister for Women and Equalities, Kate Green became aware that the beer was for sale in the House and requested that it be removed from the Stranger’s Bar due to the use of a pump clip depicting a bunny girl in a bikini, which she found disturbing 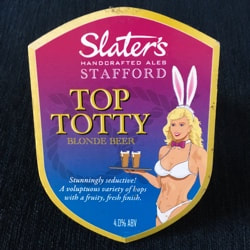 The beer was removed from the Stranger’s Bar and the Leader of the House of Commons, Sir George Young stated that “action would be taken”, which led to Top Totty being banned from the House of Commons. A petition was submitted to the British government in February 2012 calling for the beer to be reinstated but was rejected as not covering an area for which the government or parliament was responsible.

United Kingdom Independence Party Member of the European Parliament, Mike Natrass opposed the ban, saying that “knee-jerk puritanism does more to damage the cause of equality than a thousand beer labels.” Top Totty was replaced in the Stranger’s Bar by another beer called Kangaroo Court. Slater’s Ales did offer to change the pump clip used when the beer was offered for sale in Parliament but did not intend to change it when offered for sale elsewhere in the United Kingdom.

It’s a sad loss to Stafford that the brewery is going, their beers featured in many of the local pubs around the town over the years.